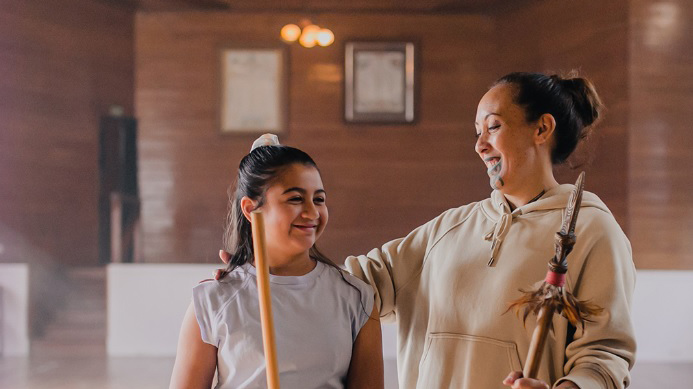 Karawhiua's Kia pakari tonu ai campaign has taken our message of staying resilient to all Aotearoa, with a significant mainstream TV campaign during Matariki.

The campaign reinforces that, as Māori, we know how to keep our whanau safe. We've been doing it for thousands of years. It reminds us that the mahi isn't over because COVID-19 is still in our communities.

The campaign video depicts aunty, played by kapa haka superstar Miri Morrison, and niece practicing mau rākau. This is a great example of how we need to keep our immune systems trained up to recognise and fight the virus. It also shows that, in many communities, our aunties are the ones working at the front-line of our hauora defence.

The video was the first one hundred per cent reo Māori commercial to air on mainstream TV! Ka rawe! Whānau have told us that they were proud to see an ad on TV that celebrates how Māori have responded, delivered entirely in our reo rangatira.

Nearly half of all Māori 15+ and around two thirds of pakeke Māori 40+ saw the ad on TV, including during the June Māori All Blacks vs Ireland game. The campaign continues to run across our social media channels and is on the Karawhiua website.